As someone who walks and cycles a lot, I support plans for more widespread implementation of 20mph zones in our towns and cities. These should primarily be a place for people, and not dominated by motor vehicles. 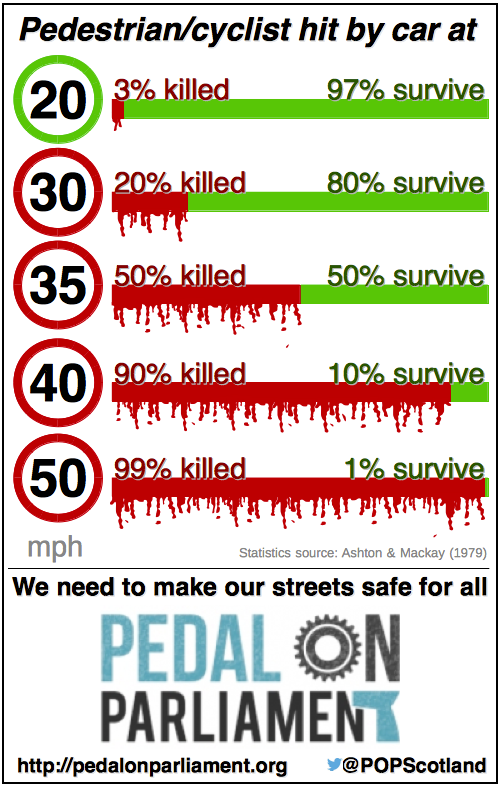 Pedal on Parliament recently put together a piece to mark World Day of Remembrance for Road Traffic Victims, which I volunteered a graphic to illustrate. I am delighted to say this was widely re-shared on social media, but that is not the point of this post.

These depressing statistics illustrate that there is an increasing likelihood of serious injury or death for pedestrians and cyclists who are unfortunate enough to be hit by fast moving vehicles. In addition to (hopefully rare) crashes, it is also rather unpleasant to have vehicles constantly speeding past you when on a bike, on foot, and presumably when in a wheelchair.

Do we really need so many cars, vans, and lorries thundering through town centres? Especially when these are then parked (either legally or illegally) on narrow roads blocking access for bikes, pedestrians, wheelchairs, pushchairs, etc.

Edinburgh has recently completed a consultation on much more widespread implementation of 20mph speed limits, with the presumption of the lower limit on “all residential streets, shopping areas including the city centre, and to main roads with large numbers of pedestrians”. Results of the consultation are due to be published early in 2015, but at the recent SPOKES Lothian Cycle Campaign meeting, Councillor Adam McVey mentioned that there had been fewer objections to the consultation than expected, which is positive[1]Although it is somewhat negative that the council expects there to be widespread objection to a 20mph limit, showing the motor-centric bias within society.

Glasgow also have plans to make much of the city centre 20mph, and to install more bus gates to limit private vehicles going through the city centre. Rob Williams has posted on the positive aspects of the Glasgow city centre transport strategy. Although there are also plenty of negative comments about the state of walking and cycling provision in Glasgow, which resonate with me from when I cycled there.

I don’t think that all roads within a city boundary need to have a 20mph limit, but that this should be the default position. Where there is space to have segregated routes alongside, for walking and cycling, the main road should have a 30mph or possibly even a 40mph limit. However these needs to be proper segregated routes, and not just shared pavements which are an unnecessary source of conflict. There also needs to be sufficient provision for pedestrians and bikes to cross, without waiting for too long.

There is often protest against reducing speed limits, because they will increase congestion and increase travel times. I am not sure how accurate this is, but anecdotally I don’t think it is necessarily true. Dave McCraw posted an interesting piece on Lothian Buses and 20mph limits, showing that they rarely travel more than 20mph through Edinburgh. Cars and other traffic often don’t exceed this either, I often catch up with the same cars when cycling (and sometimes even when walking) at somewhat less than 20mph.

It will take time for attitudes towards speed to change. But hopefully more widespread implementation of reduced speed limits will facilitate this. Even if people don’t exactly stick to the 20mph limit, it will be an improvement. Vehicles being driven at 20-25mph feel much less threatening and dangerous than those at going at 30(ish)mph. The statistics behind the graphic show that there is a massive reduction in risk with this (small) reduction in speed.

While putting together the graphic, I had a bit of a look into the statistics behind it. The numbers produced by Ashton & Mackay in 1979 may be slightly outdated, and may have bias or overestimate the risk. Other more recent studies that I found looked only at the risk to adults, but not to children and other vulnerable people. The various studies[2]ROSPA produced a report on 20mph limits which references some studies on collision risk and survival rates come up with different absolute survival rates for each collision speed, but all show the same trend. The risk of injury and death is significantly diminished by reducing vehicle speeds from 30mph to 20mph. Therefore this is what we should strive for, if we want to make our cities more friendly.