This paper covered the work I have done in the first year of my placement at FloWave, measuring the currents generated in the tank. This included long term temporal stability of the flow, plus spatial variation of the flow across the test area of the tank, although this all focused on average velocities. I am now working on more detailed measurements with a Vectrino ADV, which should give more information about the turbulence in the tank, which is also of considerable interest to many developers and other users of the tank.

I presented my work in a session on tidal device development and testing, and it seemed to go down well. I covered almost everything I had planned to, with only a couple of minor omissions. I also knew beforehand that there was a compatibility issue with the video I had planned to show, so was able to talk around that on the previous slide, and suggest I could show the video to interested people afterwards using my iPad. I was also able to answer the questions posed by other researchers, and went on to have some interesting discussions over the following coffee breaks.

The rest of the conference included quite a few papers that will be of immediate interest to my research, as well as a number that were of more general interest. There were also a small number of presentations that I sat through without a clue what was being discussed! 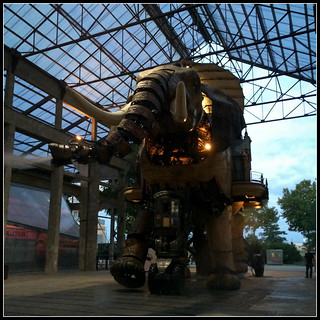 Being in France, the conference food was fantastic. Rather than the stand up buffet typical of these events, we were treated to a three course banquet every day. And on the Wednesday evening, we had a Gala dinner at Les Machines de l’Île, and saw the artistic/engineering feat that is Le Grand Éléphant a 12m high, 50tonne, mobile elephant made from wood and steel.

As with the EGU conference, I traveled to France by train. Although this time I didn’t have a chance to make a holiday out of the trip. Instead I spend most of a day on the train each way, relaxing, and watching the world go by. And on the way out it gave me a chance to practice my presentation in the relatively empty carriage of the early Sunday morning train to London.

As with my previous trip, all my trains ran on time, with no problems. The only minor thing I thought might prove to be an issue—picking up my SNCF tickets in Lille during a 20 minute change—turned out not to be a problem, as I was able to collect all my tickets in London before boarding the Eurostar.

I also had a bit of time in the evenings to explore (the centre of) Nantes, which is a very pleasant city, with some beautiful architecture, and have put some of my photos from the trip on my Flickr page. It would have been nice to spend more time exploring the city and the region, but the timing was not great, with other things happening back in Edinburgh.

Hopefully I will make it to the next EWTEC conference, to be held in Cork, Ireland, in 2017, and I will have much more research to present. The next conference I have submitted an abstract is somewhat nearer to home, the International Conference on Ocean Energy (ICOE2016) which will be held in Edinburgh next February.