Once I knew that I had been accepted to present my poster at the European Geosciences Union conference in Vienna, I started to think about how to travel there. I’ve never been a big fan of airports, and the associated security palaver. So my first stop was of course the excellent Seat61.com, which shows that overland travel by rail was possible and not a ridiculous idea. I began to plan the trip.

Right from the start, I knew I wanted to travel through the Alps. This meant a stop over in Zürich, plus changing trains in Paris. I thought it would be nice to spend a couple of nights in each, to give me at least a full day to explore. I decided to return by one of the alternatives suggested on Seat61, the overnight sleeper train to Köln. Originally, my plan was to return via Brussels and back through the Channel Tunnel, but then realised that the Amsterdam–Newcastle ferry was not that expensive, and gave me the opportunity to visit that city so famous for its cycling.

My eventual route involved 8 trains, 1 ferry, and 2 connecting buses, covering 4430km over 51hours. OK, so it may not be as fast as flying, but part of the joy of travel is the journey. And it meant I got to visit 5 European cities instead of just one. 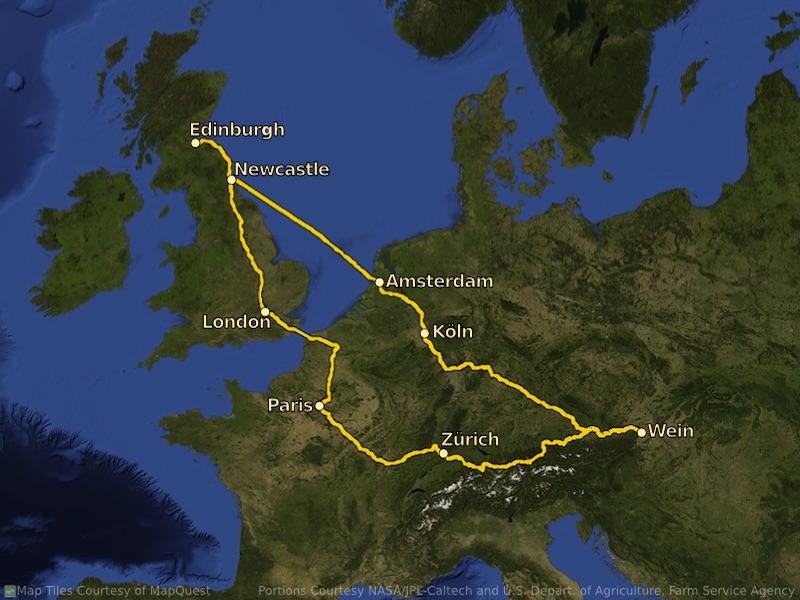 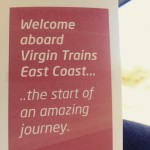 A brisk walk to the station on a sunny morning, before boarding the newly rebranded “Virgin Trains” East Coast service to King’s Cross.[1]Apart from everything else wrong with privatisation, that money wasted on re-brandning is scandalous. I wonder how much cheaper rail fairs would be if we still had trains painted in British Rail blue and white Despite being annoyed by the branding, signs were good …the start of an amazing journey.

After a quick stop in London, and another chance to admire the wonderful architecture of St Pancras station, I checked in to the Eurostar. Although there is a metal detector and bag scan (the only one I would encounter on my trip) thankfully they do not make you remove your shoes or throw away any liquids you might want to take on your trip. There was a short wait in the departure lounge, of about half an hour, before we were allowed to board the train. 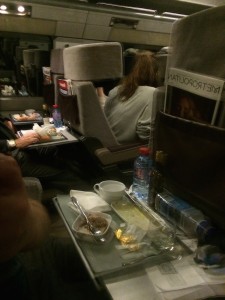 Travelling in Standard Premier meant having lunch served as we hurtled through the tunnel, Roast beef, white wine, and a chocolate pudding.

As we emerged in to the daylight, the 4g data connection I’d had through the tunnel ended, and up popped a message from EE Welcome to France, calls cost lots, and you need to pay extra to use data abroad (or words to that affect). Confusingly, my phone also automatically adjusted the time zone. Helpful, but confusing nevertheless, as it took me a while to work out that it had.

After checking in to my hotel next to the station, and sending a few emails, I decided to explore the city. Having GPS and offline maps[2]Openstreetmap based, using the Maps.me app meant I could confidently wander about without fear of getting completely lost. As a slight aside, it also meant I had a GPS trace so that I knew where all my photos were taken.

My French is shockingly poor, having not used it for nearly 20 years since school. I had been trying to learn some German, given I knew next to nothing, and was going to be spending the majority of the trip in German speaking countries. Therefore I didn’t have time to brush up on my French. Trying to recall those distant French lessons was not helped when, as I sat in a restaurant the first night, I recognised the family next to me were speaking a Scandinavian language (which I later found to be Swedish). Not really what I needed as I tried to dredge up what little French remained in my memory. 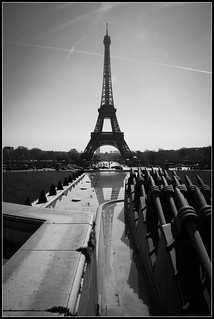 The next day I decided to explore all of Paris. Well — not quite all — but I think I did manage see rather a lot, and it definitely makes me want to go back. I started off early, but possibly trying to get on the RER at 8h30 on a Thursday morning was not such a good idea. I was expecting it to be busy, was quite surprised by just how busy. I didn’t manage to get on the first two trains that stopped because of the crowds. But I didn’t have much of a wait, as 8-coach trains were arriving every few minutes, although they were all pretty full.

In the day and a half, I managed to see most of the cities landmarks, but I didn’t have time to visit any of the museums or galleries there. Given the weather was so beautiful, I would have been loath to spend it indoors anyway. And this turned out to be a similar pattern for most of my trip. Over the one day I logged over 40,000 steps on my Fitbit, walking over 28km around the city, in addition to many Metro journeys.

A few things struck me about Paris. It is a beautiful city, especially Montmartre on a sunny afternoon. There were tourists everywhere, or at least around all the landmarks I was visiting. And that a remarkably large number of people were smoking. 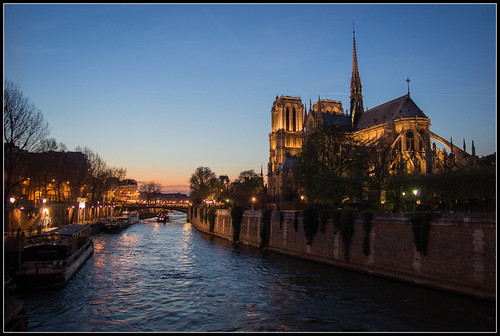 So after only 40 hours, I boarded a TGV-Lyra at Gare du Lyon, bound for Switzerland. Another uneventful and comfortable journey, speeding across the French countryside, reaching 324km/h (199mph) at one point. So just 4 hours 3 minutes later, I stepped off the train in my next destination.

For the rest of the trip see
Part 2: Zürich and through the Alps;
Part 3: Vienna and the Conference;
Part 4: Overnight to Köln;
Part 5: Amsterdam and home by ferry;
and my photos of the trip on Flickr.