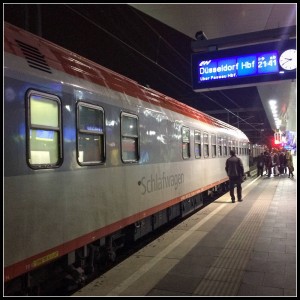 I still had an hour or so to wait once I finished my meal, but thanks to the information on Seat61, I knew I was allowed to make use of the 1st class lounge with my sleeper ticket. So I sat with my free glass of wine and nibbles, watched the world go by, and caught up on the latest news.

I have travelled several times on the Caledonian Sleeper train between Inverness and London, and I find it a comfortable and enjoyable way to travel. The motion of the train gently rocking you to sleep, then waking up in the morning in a completely different place. 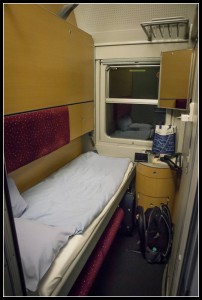 The DeutschBahn Schlafwagen was similar to the UK sleeper train, although with just a little bit more room, afforded by the larger continental loading gauge. It was mostly an uneventful trip, although I did manage to call the attendant by mistake just after boarding, when searching for the switch to dim the night-light.

I woke to another day of bright sunshine, although unfortunately I was on the wrong side of the train to see the Lorelei rock, rising above the Rhine, from my cabin. If I had realised where the train was just 10 minutes earlier, I could have looked out of the corridor windows.[1]This is a good excuse to do the trip again, and I am sure there were a lot of things I did not see on my travels. After converting my bed into a couch, I sat eating the coffee and breakfast rolls I had ordered the night before, as we continued down the Rhine valley towards Köln.

A day of sightseeing in Köln

After stepping off the train at 08:40, some 11 hours and 970km later, I headed into the station to find somewhere to leave my suitcase. The only option appeared to be automatic lockers that took multiple bags and stored them elsewhere. I watched a few people struggle with them, then had a go myself. The first one wouldn’t accept my €10 note, and the second appeared to be full, at least I think that was what the elderly couple were trying to explain to me in German. Finally I found one that worked, but it only charged me the rate for 2 hours — I wanted to leave my bag all day. I decided (correctly as it turned out) that the machine would charge me the difference when I went to collect my bag. Minor drama over, I went to explore. 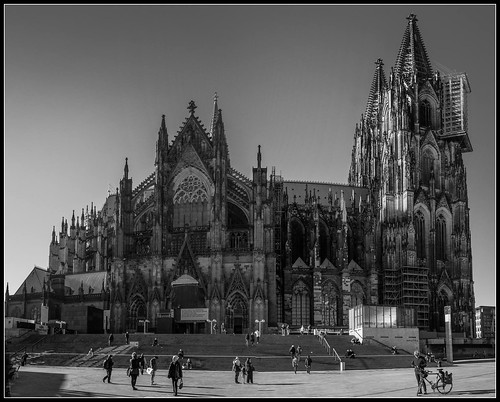 I knew that the cathedral was next to the station, and it certainly dominates the view as you step outside. Inside, the ceiling soared high above the pews. The building was filled with light, streaming through the stained glass windows.  Like many such buildings, unfortunately it was covered with scaffolding, hindering good photographs. And is also often the case with ornate buildings, picking out just one detail can be rather difficult. 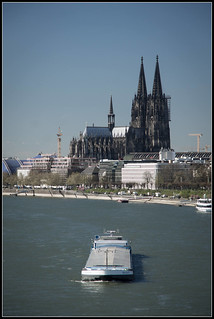 The cathedral was amazing, but it does dominate the city, and perhaps detract in some way. Maybe this was partly just me being tired and overwhelmed by everything else I had seen. I decided to go for a walk, heading across and then down the Rhine. Again, I was struck by just how large and fast flowing the river was. But also by the number of boats, both freight barges and tourist craft, constantly plying the river. I suspect there was a boat passing every few minutes, and rarely was there not one in sight.

On my walk, I randomly stumbled upon the Skulpturenpark, with some interesting, and some rather weird, sculptures dotted around. One of which seemed to be just a 4m deep, 4m diameter hole in the ground, with steps running down the inside.

After exploring a bit more of the city, I joined a large throng of people enjoying the warm sunshine, as I sat near the river eating my lunch. Every restaurant and pub spilled out onto the walkways, full of locals and tourists alike. All too soon, it was time to head back to the station, to try and retrieve my luggage. 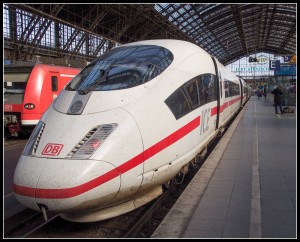 My last high speed European train was the Deutsche Bahn ICE to Amsterdam. And atypically it left late. All of 6 minutes, but this did result in a trilingual announcement apologising for the delay and explaining it was due to a problem with one of the doors. The train was also slower than I had imagined for a German Inter-City Express, more akin to UK trains, but I was in no rush on this trip, especially now it was nearly over.

For the rest of the trip see
Part 1: introduction and Paris;
Part 2: Zürich and through the Alps;
Part 3: Vienna and the Conference;
Part 5: Amsterdam and home by ferry;
and my photos of the trip on Flickr.