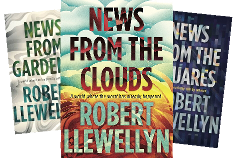 This is a somewhat overdue review of the sci-fi News from… trilogy by Robert Llewellyn (probably most famous for Red Dwarf and Scrapheap Challenge). I have been meaning to write about these great books for a several months now, but haven’t got round to it for one reason or another.

I started reading the free Kindle preview of the first part of the trilogy News from Gardenia when I was off on my European travels. Unfortunately, I wasn’t able to download the rest of the book until I got back. But I eagerly purchased the full book on my return, as I had really enjoyed the first chapter.

Over the course of the next week or so, I finished the book. And the second part News from the Squares. Then went to download the final part News from the Clouds — only to find that it hadn’t yet been published! Luckily I only had a day to wait, and so was able to read the entire series within a fortnight, which perhaps gives some idea of how much I enjoyed reading these books.

The premise of the series is quite simple, the main character Gavin Meckler, an engineer for a mining company, is mysteriously transported 200 years into the future while flying his electrically powered light aircraft past Didcot power station. What he finds is a world very different to that which he left. A world largely covered by trees, with no roads, no factories belching smoke, and no war or famine. It is a utopia, where a small population live in harmony with the Earth, growing the food they need locally, powering their lives with orbiting solar cells.

In trying to get back home, Gavin finds that he has instead shifted sideways into an alternative universe, but still 200 years in his future. The second book deals with “the Squares” — a vast city state comprising large blocks of buildings covering what is left of the UK after dramatic sea-level rise, but again without roads or motorcars. The other main difference is that this is a world run entirely by women. After some interesting travels, at the end of the book, Gavin again tries to get back to his home time.

But instead he ends up in the clouds. A third possible alternative future, where climate change has made life on Earth very difficult. The remaining population split their time between reinforced underground culverts, and floating cities that travel the world on the ferocious winds that ravage the planet. This is the most technologically advanced of all the worlds, and Gavin finally learns what has enabled him to travel through space and time.

The series is unashamedly optimistic in how technology might save the human race, and at the same time condescending of our current reckless use of fossil fuels. However, virtually all of the technology discussed is achievable and does not break the laws of physics — so no warp speed drives. It is less fiction than the Star Trek genre, but still sufficiently removed from current technology to not be mundane.

Because it is written from the perspective of a somewhat socially awkward engineer, there is quite a focus on the various technologies and how things work in each of the possible futures. That said, the various people that Gavin meets feature strongly in the narrative, and the relationships he has with them hold the books together, without being the sole focus. For me personally, I find this makes for an interesting and enjoyable read, but I suspect someone who studied social sciences may have quite a different opinion of the books.

I can highly recommend this series to anyone with even the slighted interest in technology or the future. It was almost a shame that I finished the trilogy so quickly, and I hope that Robert writes more similar books in the future, but I am sure that I will re-read the series again in the future — just not 200 years in the future.