At the weekend, I went on a tour of Glasgow’s Central Station, which gives access to some of the hidden areas below the station, and covers some of the 130-odd year history of the station. 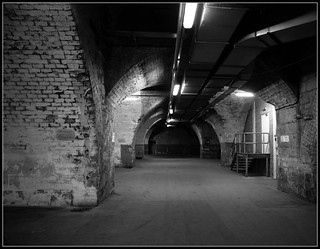 Unfortunately we were not able to get access onto the roof, as a result of the recent bad weather. Apparently, an engineer from Network Rail has to inspect the roof following snow or ice, and this has prevented most people seeing that part of the station over the winter.

This did mean however, that we got an extended tour of the underground parts of the station, starting with the “red” stairs next to platform 9. So called because they were used to transport post bags to and from the mail trains that used to run from the station, including that fateful one involved in the great train robbery. 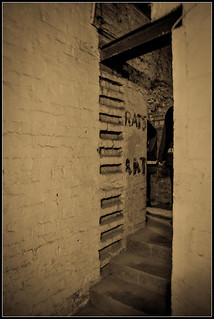 Beneath this, we got to look into the storage vaults below the platforms, which were used to store grain and coal, both of which was discharged from hoppers through a chute between the tracks, and down into the storage vaults. We also learnt about the presence of rats from the nearby River Clyde, which put a stop to food storage due to the spread of Weil’s disease, caused by rat urine.

We didn’t see any rats on the tour, probably because most of the vaults are now empty, and any food is stored in sealed metal trollers ready to be loaded onto trains.

After seeing the delights of the corridor painted completely in “Corporation green”, some of the original metal beams supporting the roof, and hearing about some unresolved reports of strange sightings that were not Golf Hotel Oscar Sierra Tango Sierra according to our guide, we got a glimpse of perhaps the most interesting part: the disused low level platforms. 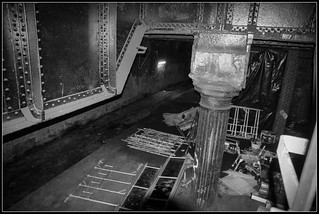 Unfortunately again, it is not possible to get down to them at present, but they are hoping to install a better staircase and open this area up over the course of the year. We were also told about the prospect of an extended tour covering the lower levels of vaults, stretching down to the river, including what remain from the original village of Grahamston that the station was build over.

It was a really interesting tour, led by a knowledgeable and funny tour guide, and well worth the £10 it costs. I would highly recommend it to anyone in Glasgow with any interest in history or engineering, and I will be going back to see the other parts of the station when they are opened up further. However, all tours are currently booked up, so you might need to wait a while to get tickets.

See more of my photos from the tour on Flickr.