I finally finished my thesis, and handed in a copy for examination a couple of weeks ago. I’m now catching up with all the things I’ve not done over the past months, including sleep and updating this site.

The actual process of handing in the thesis for examination was something of an anti-climax. I think this was because there was no single point at which it was finished and submitted, rather it was a more drawn out process over a few days, or even weeks. Over the final month, although it was not finished, and I was still waiting for comments back from my supervisors, I knew that I had a document that could be submitted with just a bit more work. The extra revisions and comments definitely improved it, but I could have submitted something earlier if that had been necessary.

Once I had reviewed the final feedback, I finished off the discussion and conclusions sections. By that time I had had enough. It was done. 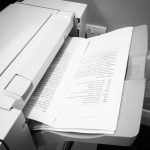 I decided the final editing was complete on the Friday afternoon, so I went to the library and started printing. Unfortunately just as I sent the first batch to the printer, an announcement came over the tannoy “the library will be closing in 15 minutes”. My print run took 14 minutes! And I still had the majority of it to print. So the next day it was off to the main library to print the next batch. With some final printing on Monday, I assembled four copies and took them to be bound. Then I had to sort the pdf copy, and remember how to burn files to CD, something I’ve not done in several years… 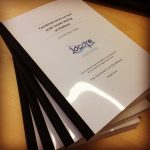 Finally it was ready to be submitted, so I wandered over to the admin building, confirmed I was in the right place, and handed over three copies of my thesis. I think the woman on the desk was used to people feeling a bit … oh … is that it‽ … and offered me a lolly from the pot on the counter. Three years work, 65000 words, 200+ pages, and all I get to show for it is a lollipop! Not quite sure what I was expecting, but not this empty feeling.

I still have the viva to go through (sometime tbc) and no doubt corrections to make, before getting it all finalised. It has been an interesting experience though. Thanks to everyone who offered feedback and support over the past four years.

I will still be about at Edinburgh, as I have sorted out a short term RA positions working on the MARINET project for a few months, and I have applied for a couple of other positions, so we will see what the future holds…