European rail trip, part 2: Zürich and through the Alps

A loud explosive bang rattled the station. Travellers of all nationalities looked round to see the source, but there did not seem to be any major panic, flames, or smoke. As there was no reason for me to wait in the station, I made my way towards the main entrance, and out into the sunshine. [1]Despite searching online over the next couple of days, I was not able to find anything about the noise, so didn’t think much more of it. I have now learned that a Romanian man climbed onto the roof of a train, and was electrocuted. Despite attempts to resuscitate, he died at the scene.

Stepping out into the sunshine, I was greeted by something more like I was expecting. A picture postcard city. Extremely tidy, but lots of colour and interesting architecture. There was blossom on the trees, many flags fluttering in the breeze, enhanced by the bright spring sunshine. I walked along the banks of the Limat river, and up an immaculate cobbled street to my hotel. 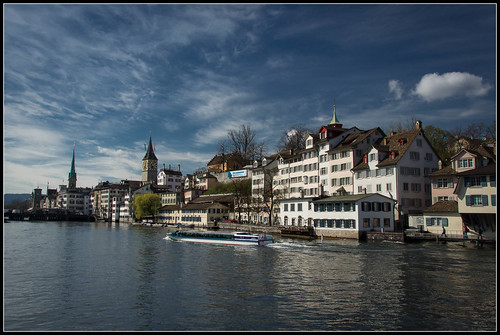 My friend Simon didn’t particularly like Zürich, he was struck by the silence on the streets, the sinister lack of noise. 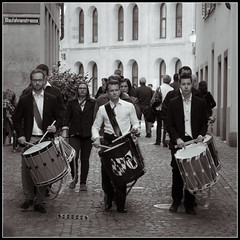 Perhaps it was just as well that I had booked my trains before I re-read his blog post, because I had a completely different  experience of the city, and was really glad I visited. Maybe I was lucky that the Sechseläuten festival was happening whilst I was there, but this meant there were drummers marching in the streets, bands playing on the hill, and just a general party atmosphere about the whole town centre. I can accept that, even with the festival, it didn’t have the same chaotic bustle as the other capitals I visited. Everything was a bit more regimented and organised, perhaps that is just the Swiss way. There was also a lot of wealth on show, with many new and expensive cars around the city. That said, I didn’t find being there much more costly than the other capital cities I visited. 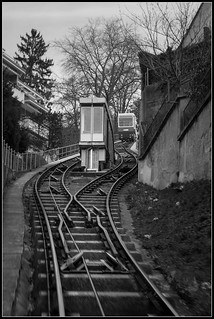 I made extensive use of the tram system, hopping on and off to explore the city, getting good value for money from my 24 hour ticket. This also covered the Seilbahn Rigiblick funicular railway and the Dolderbahn rack railway, which allowed me to reach vantage points high above the city.

The best view however was from the top of Üetliberg. I caught the number 13 tram to the western terminus, then started walking up the path. It didn’t look too far, and there was a well made track, so off I set. Without a detailed map (although I had my phone and a wee tourist map) I decided to go for the most direct route, heading towards the prominent radio mast at the top. This meant the path I was following got progressively narrower, and less well made, until it ended in a bit of a scramble to the top. There were great panoramic views of the city and surrounding valleys from the observation deck at 900m above sea level, although the weather was slightly cloudy, so on a clear day I am sure the view is amazing. After taking in the view, and cooling down from the steep ascent, I found a much better path down, alongside some mountain bike trails. I realised, however, when I got to the outskirts of the city that there is a railway that runs right to the top! The climb was probably only about 400m, but this was still substantially more than I had originally anticipated, and made me enjoy my traditional Zürcher Geschnetzeltes und Rösti[2]Veal in a mushroom sauce, with Swiss hash browns even more.

Having done a lot of exploring on Saturday, the Sunday morning was spent wandering down the river, then walking around the craft fair that accompanied the festival. Watching craftsmen split wood into roofing shingles, or fashion metal plates into massive cow-bells. There were plenty of people milling around in traditional dress, including musicians from marching bands, more drummers, and a horn section.

Then it was time to head back to the station, and take my longest daytime train journey.

A highlight of the trip. The views were nothing short of spectacular. And even though it was an eight hour journey, I did think as I arrived in Vienna that I would happily get on the same train back the next day!

After pulling out of the station on time, and what seemed like a long time going through a tunnel under the city, we emerged alongside the southern shore of Zürichsee, and the stunning views began.

We made brief stop in Buchs where our 10-coach train must have joined another, then we headed off back the way we came. But the line quickly turned towards the Rhine, and crossed into Lichtenstein. After just a few brief minutes, we reached the other side of the small country, and entered Austria. 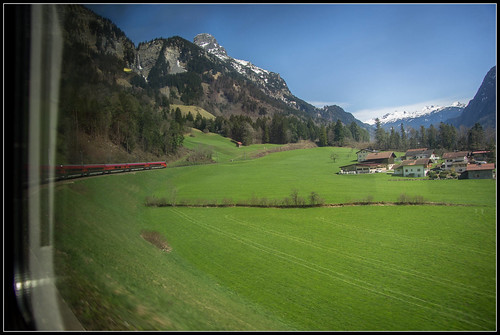 The train started the serious climb into the Arlberg pass. With a minimum of fuss, the 20 coach train glided smoothly along the side of the valley, climbing ever higher above the pastures below. We passed over many bridges, and through many tunnels, the with magnificent mountain scenery all around. Suddenly, and rapidly, the train lurched to a stop–with a few things sliding off neighbouring tables. Presumably this emergency stop was due to animals on the line, as we got underway again momentarily.

After more climbing, and passing through a couple of rather long tunnels, we emerged at St Anton Am Arberg. This was the highest point on my journey, at 1 309m[3]4 294 feet for those who still think in imperial units. Nearly the height of Ben Nevis, but the snow capped peaks towered well above the station. 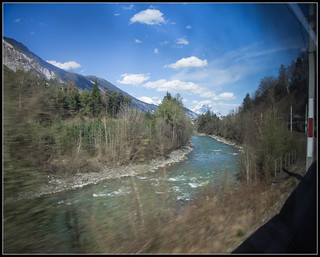 The descent into Austria proper followed the river Inn, passing through Innsbruck. The track was a continuous series of curves, twisting this way then that, passing over bridges and through tunnels. Some serious engineering, that would be interesting to explore, but instead I sat and watched the world go by.

I wasn’t expecting the border crossing into Germany. Though the only notification of this really was my phone changing carriers, and beeping to announce that I still had to pay extra if I wanted to make calls. I thought it only right, since we were passing through Deutschland, to dine on bratwurst, käsewurst[4]cheese filled sausage, und sauerkraut.

We crossed back into Austria at Salzburg, with the famous castle visible from the train. Helpfully, the man in seat 61 points out which side of the train to sit to get the best views on this journey. Just as the sun was setting, I caught my first glimpse of the Danube, although the trees made it difficult to get a good photo.

So just under 8 hours later, we pulled into Vienna. My home for the next week.

For the rest of the trip see
Part 1: introduction and Paris;
Part 3: Vienna and the Conference;
Part 4: Overnight to Köln;
Part 5: Amsterdam and home by ferry;
and my photos of the trip on Flickr.