I had arrived in Wein Westbahnhof at 20:30, found the subway, bought a ticket, then boarded a train. Before we departed, crowds of football fans piled into the carriage, shouting and singing. Without knowing the language, I could tell their team had won. They were jumping up and down, rocking the train somewhat. In doing so, one of the fans must have hit the emergency lever, for as no sooner had the subway train started it lurched to a halt. The third emergency stop that day. Once the driver found and reset the offending lever, we were on our way without further incident.

The conference was held in the Austria Centre Vienna, located on the northeastern bank of the Danube, locally called the Donau. The next morning, I decided rather than take the subway two stops, I would walk across the Donau to the conference centre. It is a truly massive river, and remarkably fast flowing. The main channel is about 300m wide with a secondary channel for recreation and flood relief of about half that. Wikipedia gives an average discharge of 1900m³/s at Vienna, which would fill the FloWave tank in just over a second!

The other thing that was massive was the conference. The sheer scale of the EGU was hard to grasp. Apparently there were over 11 300 delegates from 107 countries worldwide, presenting 5450 posters and 3700 talks. It took over the entire ACV, spread across four floors with 10-15 rooms on each, plus 6 halls with space for about 1800 posters each day. Quite different to the small Scottish conferences I have been at before!

My poster was printed onto fabric, which meant I could fold it up into my bag, and saved carrying a large poster tube on my travels. This meant there were a few creases when I arrived, so I borrowed an iron, and set about ironing the poster. The cleaner who came to collect the iron and board thought this to be rather amusing.

During my poster session, no-one came to speak to me directly about my research, which was not that surprising. However, plenty of people were interested in the tank, how it works, and its capabilities. I had some good discussions over the hour or so session, but nothing that will change what I am doing in my research.

With it being such a big conference, it was at times difficult to decide which of the 40-odd parallel sessions to go to. At one such time, between two sessions I planned attending, I was standing outside a random room deciding where to go. I just happened to look at the topics coming up, and found it was a session on the Cassini-Huygens mission to Titan. Totally unrelated to what I am, and have worked on, but I found it rather interesting anyway.

Maybe it was due to the free beer, or possibly a lot of people weren’t flying out until the next day, but there were a surprising number of people still about for the last poster session. This was one of the few sessions where there were posters I specifically wanted to see[1]The other sessions with people I would have like to have spoken too were running at the same time as mine, but 3 floors up. Plus, I wasn’t leaving Vienna until late on that evening, and it had started to rain heavily, making a last sightseeing trip less appealing, so I stayed at the conference for the last session.

I didn’t find Vienna to be as pretty as Paris and Zürich. Maybe this was partly because I was tired from the conference, and  a bit overwhelmed by what I had seen already. But also, I think it is less of a touristy destination. That’s not to say I didn’t like the city, and I am sure there is much to see in the surrounding region too. 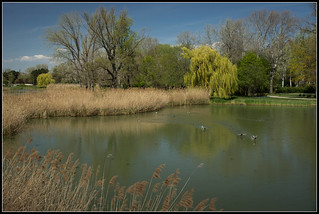 In between sessions at the conference, I also took the time to explore the Donaupark and the surrounding area. There seemed to be lots of people enjoying the sunshine, the sculptures, and the water. A few people were sailing, but nobody was swimming in the Neue Donau pools, it was probably too early in the year for that.

Further upstream, where the Donaukanal splits off the main channel of the Danube, I was surprised again at just how fast the river was flowing. Seeing up close the volume of water, which was nowhere near a flood level, was quite impressive. It makes me realise just how small an island the UK is. That despite the high rainfall, our largest rivers are in in comparison. 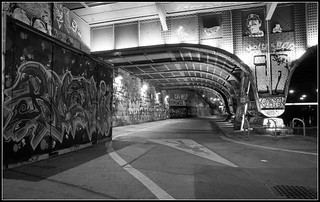 There is always something I enjoy about seeing the gritty side of cities at night. The path along Donaukanal is a great example of this, with graffiti covered walls and multicolour lights reflected in the flowing water making for some rather atmospheric photos. The subway rumbling alongside adding to the atmosphere, although obviously not my photos.

Walking through the city on Thursday night, I passed the Rathaus, or city hall. There was quite a party going on, with stalls selling beer, bratwurst, and many other delicious looking things. To limit the litter problem that often blights these type of events, it was €5 for a beer, but with a €1 deposit on the reusable glass[2]Actually made of plastic, but not sure there is a better word. Some enterprising lads were going round collecting up stacks of empties, obviously enough to pay for a few drinks. There was also a traditional band playing, who were quite good, although they did take nearly an hour for the sound check. 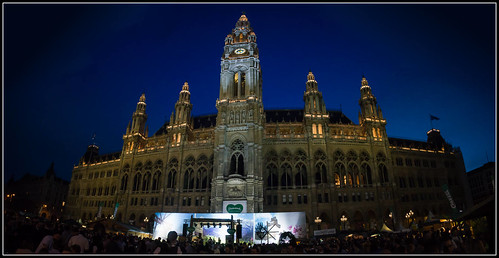 On the last evening before getting the sleeper train, I realised that I had not yet tried Wienerschnitzel. Happily, I found a nice looking place quite close to the station, went in and asked Guten abend. Ein tisch für nur mir bitte. Sprechen sie Englisch? to which the reply was not much. I was quite pleased that with my limited German, I was able to order my Wienerschnitzel und Dunkelbier. As it happened, in every other restaurant the waiting staff had mostly replied back in English, even if I asked in German, presumably as I didn’t sound local.

For the rest of the trip see
Part 1: introduction and Paris;
Part 2: Zürich and through the Alps;
Part 4: Overnight to Köln;
Part 5: Amsterdam and home by ferry;
and my photos of the trip on Flickr.