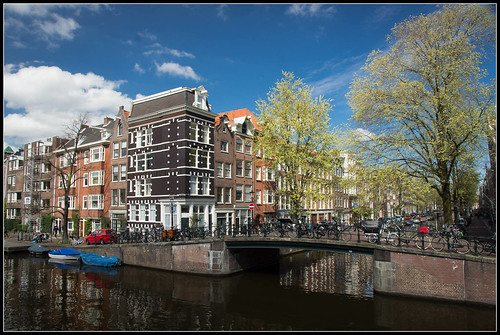 On my first morning in Amsterdam, I decided after a brief walk around the centre to take a boat trip around some of the many canals. This was well worth the €15, firstly for different viewpoint afforded by the boat, but also the captain and guide was knowledgeable, pointing out and explaining things in addition to the standard multi-lingual commentary.

In addition to the canals, the city is famous for cycling. So I hired a bike for 24 hours from Black Bikes, and explored a lot of the city on it. This was definitely one of the other highlights of the trip. Cycling around Amsterdam was such a different experience to the UK. 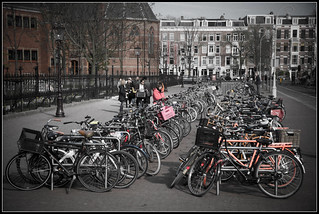 had a traditional Dutch upright bike, black with a basket, front right in the photo. This had handlebar lever operated brakes rather than the backpedal ‘coaster’ brakes often used by locals, as i feared cycling on the ‘wrong’ side of the road would be hard enough, without having to think about how to stop! I also liked the fact it looked just like every other ‘local’ bike — rather than being painted a garish colour and covered with logos for the hire company. It made me feel less like a tourist, rather just someone who was visiting.

Cycling in Amsterdam was so laid back, I seemed to constantly have a smile on my face, although I did have a few minor incidents: cycling down the wrong (left) side of the road; slipping a bit on a tram rail (but not enough to fall off); and nearly colliding with a scooter who was trying to overtake me on the cycle path as I went to turn left. It never ceased to amaze me, just how many bikes there were in the city. I know it is a cliché, but it has to be repeated. Cycling amongst them was certainly an experience, as was seeing the multi-story bike parks around Centraal station.

After exploring the main city centre, I took one of the free passenger ferries across the river IJ. These were timed to the minute, with a countdown to the next departure. Turnaround was only about 90 seconds, with crowns of pedestrians and cyclists pouring off before the next crowd, me included, rushed on. Whilst cycling round the suburbs of Florabuurt, I stopped at a friendly bike shop, and bought myself a big Dutch style bell. So now as I cycle round Edinburgh, I can loudly ring “ding-dong” and remember how relaxed it was cycling in Amsterdam.

That afternoon I cycled down to the Vondelpark, and sat by the lake in the sunshine drinking a beer along with a large proportion of the local population. I then continued on traffic free paths as far as the ring-road, before heading back into the city along the Amstel river. I think I covered about 54km on the bike in the two days, and it was a great way to explore, stopping every now and then to take photographs, or just admire the view. Just like Zürich, there were a lot of trams in the city — although with the freedom of the bike I didn’t actually use them. 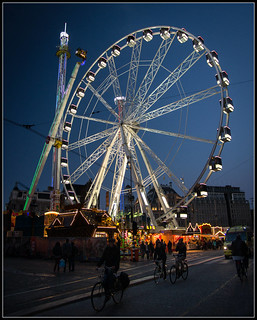 In the evening, the noise of the funfair filling Dam Square filled the air, children squealing with joy on the rides, occasionally drowning out the cheesy pop music. Throughout the rest of the city centre, the smell of weed was pretty pervasive, with lots of coffee shops. However prostitution, the other famous vice, was far less obvious. Perhaps I didn’t walk on the right streets at the right times, but it really wasn’t something I was looking for, so I don’t feel I missed anything. 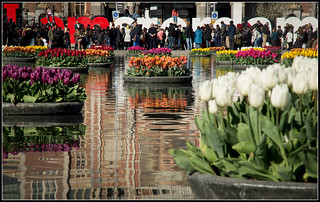 There were a lot of tourists in Amsterdam, both stag and hen dos, but also many other people just visiting. I passed a ridiculously huge queue outside the Anne Frank house about lunchtime on Monday, several hundred people at least. While I’m sure it could be quite a sobering experience to visit, I think this would be severely detracted by shuffling through the building in a large, noisy, queue. Plus, my time was limited, and I wanted to see as much as possible. And I was lucky enough to still be enjoying beautiful sunny weather.

Ferry from IJmuiden to North Shields

I thought I had arrived for the coach to the ferry terminal in loads of time, then realised I had cut it a bit fine because of a mix up between timezones. But because of my tendency to be ridiculously early for things, I easily caught the last bus out to the ferry, rather than the first one as I had expected to. 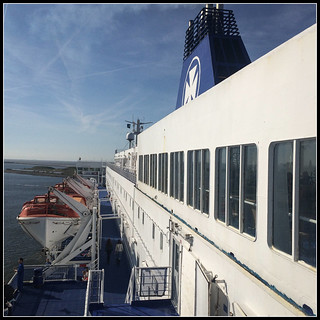 At the terminal, security was decidedly low key. Show your ticket, passport, then walk down a long gangway corridor onboard the vessel. I had an outside cabin on deck 6, with a window to look out at the waves. Except that there weren’t any waves to look at. The crossing was completely flat calm, and boring. It’s not that I wanted to be sea-sick in heavy waves, but it really didn’t feel like I was afloat.

As the flat shoreline of the Netherlands disappeared over the horizon, and we passed between offshore wind farms, my camera screen flashed up that both the memory card and battery had nothing remaining. It was time to head inside and get some dinner, and some rest.

After disembarking and going though UK border control, I jumped on the direct bus to the railway station, followed by a large group of presumably Dutch children. Both the bus driver and teacher seemed bemused as the ticket machine printed out a roll of about 40 tickets.

Since the sunny weather was continuing to hold, I decided to have a quick wander around Newcastle to stretch my legs before getting on my last train, back to Edinburgh. I have passed through the city many times, but never stopped to explore.

Then it was time to head home to normality once more. This happened slightly sooner than expected, for once I was back on the UK train, I found that while the carriage had power sockets, they were not working. Typical of British railways!

For the rest of the trip see
Part 1: introduction and Paris;
Part 2: Zürich and through the Alps;
Part 3: Vienna and the Conference;
Part 4: Overnight to Köln;
and my photos of the trip on Flickr.