I realise that I’m very much overdue an update on my research progress, having posted very little so far and nothing in the last year.

Things are generally going well, although I still feel there is a lot to do and only a limited amount of time to do it in. This feeling of pressure is probably due to my colleague Sam, who is a year ahead of me in the IDCORE programme, frantically trying to get his thesis finished off this week. I know that I don’t need to be at the same stage as him — that I have 12 months of funding left — and that I am fairly well advanced with my research. But that doesn’t stop the nagging feeling of not having enough time left.

I’ve had a couple of good meetings with my supervisors recently, who have reassured me I am on the right track, which is nice to know. I’ve also been lucky not to have had any significant problems with my project, such as the company going bust which has unfortunately happened to a few of the other researchers. So I now have an outline of what I want to include in my thesis, which runs to seven pages just as headings only! I think this means I have my work cut out for me over the next year, trying to pull together a coherent tome documenting my research.

Recently I have been working on the third topic of my research, looking at how to test models in combined waves and currents. This has involved reviewing all sorts of guidance for tank testing of models, of which very little is directly relevant. Therefore I am also developing a series of procedures covering what needs to be considered, with a focus on the FloWave facility. I’m definitely not claiming to be an expert on tank testing for marine renewable energy devices, but hopefully I can collate something useful based on my work at FloWave, and the publications of a host of other more knowledgeable people.

Prior to that I was working on a joint piece of work with Sam, looking at how to re-create realistic sea conditions in the tank with both waves and currents. I presented some initial results from this by poster at a few recent conferences[1]the International Conference on Offshore Energy (ICOE2016) and the 29th Scottish Fluid Mechanics Meeting, both in Edinburgh, as well as at the 2016 European Symposium of the International Network for Offshore Renewable Energy, and together we have written a paper which we plan to submit to Ocean Engineering this autumn. One of the key outcomes from this work is demonstrating that we can accurately recreate in the FloWave tank complex multi-directional non-parametric conditions recorded in the real sea, firstly with waves alone, but also when combined with a curent which alters the wave shape. 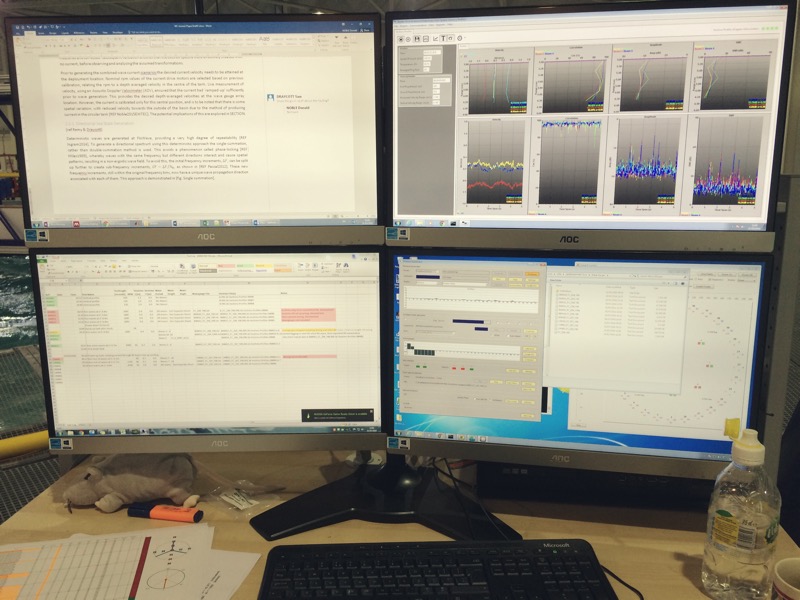 All this work has involved some multi-tasking, switching from one aspect of my research to another, particularly when running tests, as shown by the image on the right. This shows the control desk at FloWave, where I was (trying to) simultaneously review a draft of our paper, monitor the velocity measurements in the tank, record the details of the tests that were running in a spreadsheet, and control the tank to run the required tests in order.

I’m not complaining about being busy though, I’m sure I would be bored if I wasn’t constantly thinking about something new. Plus I get to control the pace a lot more that I did in my previous job at Motts, where clients would be constantly on the phone requesting something or other.